The Guelph Country Club was established in 1912 as a private golf facility but has been open to the public as a semi-private Golf facility since 1999. This fact was not widely known in the Guelph area, hindering walk-in traffic for the golf and hospitality facilities. Memberships were also in decline. The business goal was to increase awareness of the semi-private facility’s premium quality to drive walk-in traffic and expand the membership base.

A comprehensive re-branding plan was needed, while acknowledging the proud history of the Club. This re-branding necessitated a new Brand Strategy, a Brand Standards Manual, and a long-term Communications plan.

The core competency and competitive advantage of "offering public golf with private club heritage and service” was defined. The Guelph Country Club’s unique local heritage was incorporated into a slogan that claimed the Club’s place as Guelph oldest, best and most sociable golf facility: "The Guelph Country Club. Guelph’s Home Course. Since 1912.”

The logo for The Guelph Country Club was very old, clearly outdated, and more to the point – a high-resolution digital version did not exist which greatly hindered the professionalism of all print materials. A new logo was developed that modernized the traditional historical crest of the Club. The focus was on communicating tradition and "class” with a clear, legible image that would work equally well as CMYK or B/W.

There had been no consistency in the textual representation of "The Guelph Country Club” logo – a consistent font or colour palette was never established, nor was there any consistency with a slogan. A wordmark and slogan were developed with high-resolution digital representations to ensure that all print/textual representations of The Guelph Country Club would be unified in font, colour, and messaging. A Brand Standards Manual was developed for the use of third-party ad designers to ensure that all images and pantone colours be used according to precise specifications.

Radio advertising for The Guelph Country Club had traditionally been event-based and opportunistic. New radio scripts were written with a greater focus on clear messaging and branding, incorporating keywords like "public access”, "family”, "membership”, and of course, "premier golf facility”. To maintain a clear community feeling, voice talent featured Head Professional and General Manager Dave Vogel (since he also happened to have a speaking voice that felt fully professional).

Historical print ads offered no continuity of branding, in large part because a consistent logo and wordmark did not exist. Messaging was event-based and opportunistic. Consistent brand-focused representation will now be confirmed in all print media. 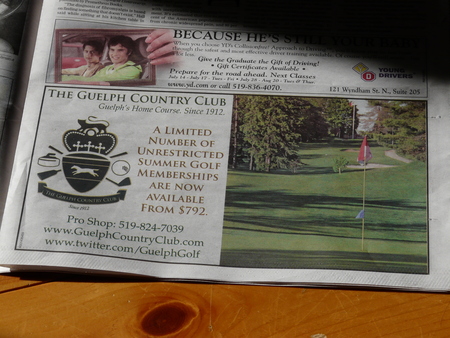 The existing website, like TGCC brochures, was informative and well-written, but had no continuity with other brand representations.  A Google search of the keywords "Guelph Golf” did not reveal the site within the top-50 results.  The website was redesigned to reflect the new brand standards and re-written to clarify the offerings of the facility.  News, current events and even video golf lessons (as well as a strong focus on SEO) will direct viewers to the site more easily than in the past and will keep them coming back for new information.  The new site can be viewed at www.tgcc.ca.

As near as we can tell, The Guelph Country Club was the first golf course in Canada to actively engage Twitter. Event updates, special rates, and even course conditions are now communicated in real-time to followers. The username "GuelphGolf” was secured to further the Club’s presence as "Guelph’s Home Course” at www.twitter.com/GuelphGolf. The re-designed website will include video golf lessons (hosted on YouTube).

In spite of the economic downturn in early 2009 and horrible golfing weather through May, June and July, The Guelph Country Club was one of the few golf facilities in south-western Ontario to enjoy a significant boost in new memberships.  Walk-in traffic also increased exponentially, and the previously under-utilized hospitality facilities turned a significant profit vs. past years.  The growth is continuing into the 2010 season, in spite of a series of rainy weekends.